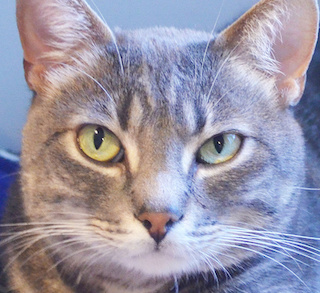 Tabitha is a fun-loving cat who especially likes to play with feather-wand toys – she’ll jump high in the air to catch them!  She was born in mid-2012, and was adopted from another shelter in late 2013.  After a few months, her owner decided he couldn’t care for her, and Tabitha found that she needed a new place to live.  After a stay in a foster home, Tabitha came to The Cat House.

While Tabitha can and has lived with other cats, she’d be just as happy to be an only pet.  If you’re looking for a cat who would be happy to be your only feline companion, Tabitha would be a good choice. Apply to adopt Tabitha here.

TABITHA HAS BEEN ADOPTED!