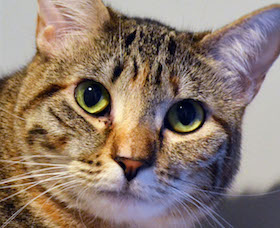 Sakura was born in a Cat House foster home on April 28, 2016, after her mother was found outdoors on her own, and pregnant, and was taken in by The Cat House.  Sakura and her sister Azalea (who looks very similar to Sakura) were adopted as young kittens, but were returned due to the adopter’s health issues.

SAKURA AND AZALEA HAVE BEEN ADOPTED!