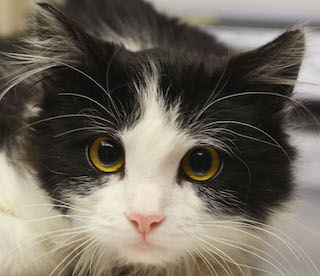 Little Kohl was found at a department store in Lincoln (guess which one!).  He was not even two months old at the time, was dirty, thin, and had been injured, probably by an adult cat.  He was one lucky kitten to have been found by a kind person who got him to The Cat House.

Kohl, whose birthday is estimated to be around October 1, 2014, is healthy now and ready to be adopted.  He’s a playful little guy who would like to go to a home with another kitten or young cats who would enjoy running around the house at top speed, chasing toy mice, and then cuddling.  You can apply to adopt Kohl here.

KOHL HAS BEEN ADOPTED!